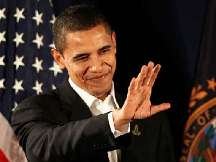 President Barack Obama sent a congratulatory message to President of Azerbaijan Ilham Aliyev and the Azerbaijani people on the occasion of 28 May - the Republic Day. The letter notes that the United States is committed to cooperation with Azerbaijan, which provides a more prosperous and democratic future for all Azerbaijanis, based on the legacy created in 1918 the world's first secular democratic state, most of whom were Muslims.

"Since Azerbaijan gained its independence, the United States has a strong support for its security, democratic and economic development. We do this because appreciate our bilateral relations, our partnership in many spheres, including the peaceful settlement of the Nagorno-Karabakh conflict, promote stability in Afghanistan and the diversification of energy supplies to Europe," said the president of the United States.

Barack Obama said that the partnership between Azerbaijan and the United States intensified, including through linkages between the two nations.

"Ensuring all fundamental freedoms of the citizens of both countries will strengthen security and create conditions for better coordination between our two governments," concludes the message.

Azerbaijan marks May 28 as the day of creation of the Azerbaijan Democratic Republic - the first in the Muslim world democratic state. It lasted less than two years, and was occupied by the Red Army in April 1920. In 1991, parliament recognized the legal successor of the Azerbaijan Republic the current APR.

International reports in the field of democracy and human rights show that the current authorities of Azerbaijan do not demonstrate a commitment to the values and ideas of the first democratic republic.