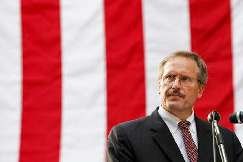 February 22, 2016 One year ago, I had the great honor of presenting my credentials to President Ilham Aliyev as U.S. Ambassador to Azerbaijan. In one of my first meetings afterward with other government officials, I was asked a straight-forward question, "Are we friends, or not?” I instantly answered "yes,” however the question is a reminder to me that relations between countries, just like relations between individuals, need continued effort and attention. With that in mind I would like to report on my activities over this past year and review how relations between the United States and Azerbaijan are growing.

Over the last year, I have enjoyed learning about the natural beauty, fascinating history, and cultural traditions of Azerbaijan. My wife, Anne, and I have visited many parts of the country, exploring sites both on and off the beaten path. Whether at the ancient rock carvings at Gobustan, the Palace of the Sheki Khans, or hiking in Azerbaijan’s countryside, I find there is so much to see and learn I feel that I am barely scratching the surface. My engagements are wonderful opportunities to interact with Azerbaijanis and to learn about their concerns and expectations. Some of the most moving encounters have been with communities of internally displaced persons (IDPs), where I have heard firsthand about the hardships they still face and the pain they feel at being separated from their homes.

These encounters have given me a clear understanding of what people care about, where the country is headed, and also of what they think about the United States. As I have said many times, there are three main fronts in our relationship – security, democracy, and economy/energy – and I say those in no particular order.

They cannot be placed in order because they cannot be separated. A healthy economy is basic to a country’s security. Economies reach their fullest potential when rule of law and respect for the individual are guaranteed, and democratic societies flourish when citizens feel secure. All of those ingredients are necessary for Azerbaijan’s long term stability and prosperity. The United States has always firmly supported Azerbaijan’s long term stability and prosperity. Moreover, Americans want a long lasting relationship with Azerbaijan and are with Azerbaijanis for the long haul.

A stable and prosperous Azerbaijan is essential for advancing those same goals of stability and prosperity regionally and globally, whether in terms of fighting terrorism, building corridors of trade and economic prosperity along both new and old routes, or working to increase the stability and diversity of global energy sources and supply routes. In a region that is seeing rapid change in very uncertain times, Azerbaijan’s importance as an anchor of stability is as crucial as ever. Helping Azerbaijanis strengthen that stability and prosperity is one of the most important aspects of the U.S. relationship with Azerbaijan. How we have done that over the last 25 years has changed as Azerbaijan has changed, as the country has become more prosperous and has come to face new challenges.

Twenty-five years ago our assistance focused on direct humanitarian aid to a country in conflict. Today we are working with Azerbaijanis in helping women and youth become more successful entrepreneurs and to support the country’s efforts to boost agricultural production and other paths to increased economic diversification. Through one of the U.S. Agency for International Development’s, (USAID), programs, the Socio Economic Development Activity, (SEDA), for example, we are working with the Azerbaijani government to support community-based projects joining local governments, citizens, and NGOs to identify local challenges and find solutions to them.

Among the 59 projects completed are actions to bring potable water to villages, to rehabilitate roads, and to build medical clinics in 52 communities. Over 85,000 Azerbaijanis in the last three years benefitted, and have gained the skills to address their own social and economic needs in partnership with their government representatives in future. Other parts of the U.S. government are active on this front as well. The U.S. military’s European Command expertise has benefited numerous communities, including IDP settlements in the Barda and Aghjabadi districts, with programs to help improve water supplies and rebuild local schools. In fact, the United States has provided over $115 million in support for IDPs since 1993, and remains committed to this segment of Azerbaijani society, just as we remain committed to working through the Minsk Group process to help realize a lasting peace in Nagorno-Karabakh that will enable all IDPs and refugees to return to their homes and open the door for further prosperity and stability in Azerbaijan as well as for the entire region.

Other U.S. supported programs, including Peace Corps, educational scholarships, and English-language training programs, have provided individual Azerbaijanis with skills that they are using to help their country. Over 5,000 alumni of various exchange programs are working all levels of Azerbaijan’s government and private sector, employing what they learned to strengthen Azerbaijan’s capacity in areas such as business, governance, and social welfare. I was particularly happy to see the many U.S. exchange program alumni who volunteered and contributed to the success of the 2015 European Games. All told, the United States has provided over $1.3 billion in assistance since 1992 to Azerbaijan, and that engagement evolves and continues. American engagement with Azerbaijan is not confined to government channels. The activities and interest of U.S. companies has also been important to building prosperity and stability and to strengthening our friendship.

The successful U.S. trade mission last year brought to Azerbaijan 14 major U.S. companies who made important connections with Azerbaijani businesses that can enhance the already significant economic ties between our countries. There are numerous American companies working here in Azerbaijan, creating jobs and boosting the economy. We also continue to engage on democratic development. All democratic countries, including the United States, are always evolving. What is important is that we constantly reassess our progress and maintain an open conversation within our societies about how we can improve. Democratic principles, such as an accountable government and embracing the rule of law, are critical for long-term stability, prosperity, and success.

As Azerbaijan confronts a global economic situation that is challenging many countries right now, public discussion on how to remove barriers to economic development, including corruption, will be important to making Azerbaijan stronger, more stable, and more prosperous. I want to take this opportunity as well to express deep appreciation for what Azerbaijan is doing on security, particularly within the region. Azerbaijan remains an important partner for the United States and NATO, through its support of transportation routes to Afghanistan and its ongoing peacekeeping mission there. Azerbaijan is developing into an increasingly important transit hub, with several successful demonstrations of the ability to move goods between China, Central Asia, and Europe through the Alat Port.

Those are important steps toward the regional vision for the New Silk Road, which like the ancient route, will also be a catalyst for entrepreneurship, innovation, and individual creativity. Azerbaijan is also a core partner in the global fight against terrorism and, given its long-standing and strong traditions of inter-ethnic and inter-religious tolerance, is an important example to other countries around the world. In sum, friends share mutual interests, values, and goals. Friendships often have ups and downs, yet friends stay the course.

A true friend is happy for another friend’s success, and is also honest and ready to help when that friend is struggling. I think all of those aspects apply to the United States’ relationship with Azerbaijan. The answer to the question, "Are we friends or not?” has been "yes” for each of the 25 years since Azerbaijan’s independence from the Soviet Union. I am certain it will always be "yes” for the next 25 years and beyond.