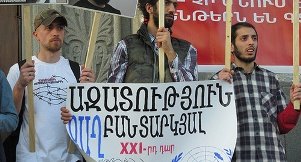 In Yerevan, supporters of the "Founding Parliament" held a protest action under the slogan "Freedom for political prisoners".

Participants of the march held on April 28 walked down Bagramyan Avenue and stopped near all the public agencies to voice their demand. The protestors initially stopped near the building of the Constitutional Court of the Republic of Armenia, then at the building of the National Assembly, and they ended their march near the presidential residence, the "Armenia Today" reports.

At the movement office, the "Caucasian Knot" was informed that the activists made a decision to hold actions in support of the arrested activists of the "Founding Parliament" in Yerevan only in the form of marches. The opposition has decided to hold no rallies for a while.

Starting from April 27, the activists have been holding marches in different administrative districts of the capital of Armenia. According to the office of the "Founding Parliament" movement, the protesters are carrying photos of the arrested opposition activists at the marches.

At present, the organization seeks all possible means to secure the release of the arrested activists. This was told to the "Caucasian Knot" by Grachik Mirzoyan, a member of the "Founding Parliament".