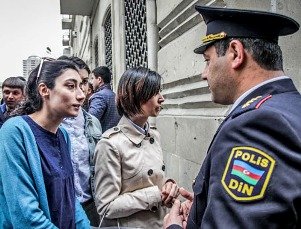 On Tuesday, in the capital of Azerbaijan, policemen have dispersed a group of supporters of the arrested activists of the movement "Nida", who gathered near the building of the Baku Court of Grave Crimes. This was reported by the "Caucasian Knot" correspondent. The Court has listened to the final speeches delivered by advocates in the case against the activists.

Yalcin Imanov, the advocate of Uzeir Mamedli, has called the criminal case a "far-fetched" one. He drew attention of the audience to the fact that investigators failed to provide evidence that the defendants were members of an organized criminal grouping. According to the advocate, the activists "suffered for realization of their right to freedom of expression."

Meanwhile, at the headquarters of the "Musavat" Party, the mothers of three accused activists Zaur Gurbanly, Rashadat Akhundov, and Shakhin Novruzlu continue their hunger strike that they declared on April 20.

At present, the condition of the hunger-strikers is still satisfactory. This was reported by Bashkhanym Abbasova, a member of the Medjlis (Assembly) of the "Musavat" Party.

"Starting from tomorrow, we, the women of the 'Musavat' Party, will also join the hunger strike. Every day, all of our activists will replace each other to go on hunger strike in solidarity," Bashkhanym Abbasova has said.

According to her, every day, dozens of activists of civil society and members of political parties, international organizations, and diplomatic missions visit the hunger-strikers.