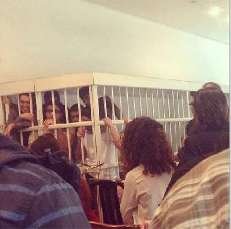 Under arrest, 8 of the 12 members of the Movement NIDA continue hunger strike.

As reported by Turan, referring to the Board member of NIDA Aygun Pandzhalieva, she was able to talk to Uzeyir Mammadli on the phone on April 27, and with the other defendants their parents talked. According to Pandzhalieva, the hunger strikers have been greatly weakened, but did not stop the action.

Turkan Huseynova, spouse of Rashadat Akhundov, reported that doctors are rarely interested in the state of the protesters, which were attended by representatives of the International Committee of the Red Cross.

A member of NIDA Rashad Hasanov at the last court hearing on April 25 said that the hunger strike has been going on for nine days.

"Since the beginning of the campaign, all asked us to stop the hunger strike. There were those who argued that the action is useless, but they are wrong," he said, urging youth activists to fear nobody and nothing, to be brave and active.

At the same time, the international support of NIDA activists increased. In the German city of Nuremberg Azerbaijani immigrants held a rally in support of the arrested members of NIDA. The Azerbaijani embassy in Berlin and the Nuremberg City Hall were sent resolutions demanding the release of the activists.

Similar actions took place in Turkey, New York and Florida. The participants demanded a fair trial of the members of NIDA, which since April 17 announced a hunger strike.

The parents of the arrested also began a hunger strike since April 20 and stopped it at the request of their children on the 24th.

Recall that in his speech at the trial the state prosecutor asked the court to condemn members of this movement from 6 to 8 years of imprisonment.

In turn, Amnesty International announced the arrested members of NIDA prisoners of conscience and announced a campaign for their release.

The guilt of the activists is that they called to hold a protest against the death of a soldier in the army in peacetime.