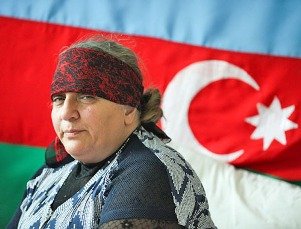 Parents of the activists of the movement "Nida", accused of organizing riots, believe the young people are innocent and they are being prosecuted for political reasons. The defendants themselves continue their hunger strike in the Baku SIZO (pre-trial prison) No. 1 in the village of Kyurdakhany, the "Caucasian Knot" correspondent reports.

On April 19, Sakina Gurbanova, the mother of one of the defendants, visited her son the Baku SIZO. She has expressed her concern over the fate of her son. The woman has stated that if anything happens to her son, she will refuse citizenship.

Mekhpara Novruzlu has stressed that when her son was arrested he was younger than 18 years old.

On the day of the beginning of the protest action, the parents have also come to support the participants of the hunger strike. They also intend to join the hunger strike by replacing the hunger-strikers several days later.

Throughout the day, the protesters were attended by members of political parties, NGOs, and youth organizations.

Azer Gasymly, a member of the Board of the civil movement "Republican Alternative" (ReAl), believes that "the authorities want to punish activists of the movement "Nida", to intimidate all young people in the democratic camp, and generally to impose fear in the society."