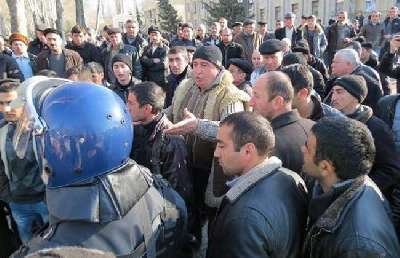 Defendants on the trial over the Ismayilli events today began a hunger strike to protest against the demands of the prosecutor to condemn them. According to the lawyer Navahi Abbasov, the hunger strikers demand a fair sentence .

Recall that on February 24 the prosecutor offered to condemn all 18 defendants to prison terms of real punishment from 4 to 9 years.

The leader of the REAL Movement Ilgar Mamedov and the deputy chairman of the Musavat party Tofig Yagublu are not participating in the hunger strike.

* January 23, 2013 there was a fight between locals and the staff of the Chirag hotel in Ismayilli, which was close to the local executive power. The staff insulted the locals. In response, the angry mob burned down the hotel Chirag. On January 24 there were clashes between the police forces and the locals demanding the resignation of the district executive. Eighteen people stand before the court, including the leader of REAL, Ilgar Mamedov, and the deputy chairman of Musavat, Tofig Yagublu.