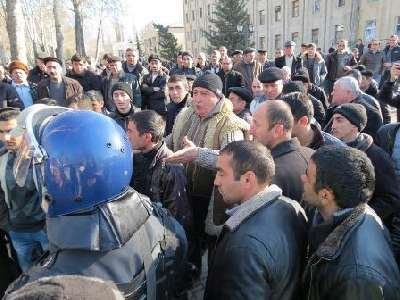 In the Sheki Court of Grave Crimes on the trial on the February 10 Ismayilli events, the review of videos continues.

On the video footage of Radio Liberty shot by Elchin Ismailly in the evening January 23, 2013 can be seen indignant people in front of the hotel Chirag and also recorded an arson of cars at the villa of the former head of the district . However, because of the darkness people's faces cannot be discriminated.

Next were heard audio interviews of the deputy chairman of Musavat Tofig Yagublu and the leader of the REAL movement Ilgar Mamedov made after the departure from Ismailly. The interviews were distributed live around 17.40. This confirms that Yagublu and Mamedov left Ismayilli and could not be members of clashes between police and protesters in the morning and in the evening on January 24.

Also shown was a video clip where you can see how Yagublu is standing in Ismailly together with journalists and the situation is calm. The judge included these video in the case materials, but did not admit it as evidence. The trial will continue on February 11.