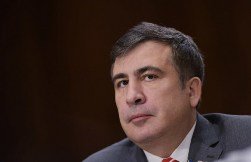 The Chief Prosecutor's Office of Georgia has appealed to Azerbaijan with a request to detain and extradite to Georgia ex-president Mikhail Saakashvili, who arrived in Baku to take part in the 3rd Global Open Society Forum.

The "Caucasian Knot" has reported that in Georgia, Mikhail Saakashvili is charged in absentia with several charges, including abuse of power, embezzlement of budget funds in the cases under investigation for the dispersal of the opposition rally in November 2007, the beating of MP Valery Gelashvili, and the murder of banker Sandro Girgvliani.

Yesterday, on April 28, Mikhail Saakashvili arrived in Baku to take part in the 3rd Global Open Society Forum. On the same day, the General Prosecutor's Office of Georgia has appealed to its Azerbaijani counterpart with the request to detain Mikhail Saakashvili.

Till present, the Georgian side has not yet received any official response from Azerbaijan, the agency "News-Georgia" reports.

According to Mikhail Saakashvili, the Georgian authorities have obstructed his arrival in Baku.

"I am very pleased to be once again in fraternal Azerbaijan. Despite the obstacles thrown by the Georgian authorities to prevent my visit to Baku, I am here again, among my friends," Mikhail Saakashvili has said in his interview to the "haqqin.az".