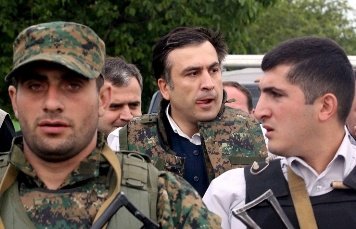 MOSCOW, June 09. /ITAR-TASS/. Russia’s Investigative Committee does not rule out it may put on the international wanted list Georgia’s Former President Mikheil Saakashvili and several high-ranking officials, who are responsible for the events in South Ossetia in 2008, the authority’s representative Vladimir Markin said in an interview with ITAS-TASS on Monday.


"The investigation has the information that Georgia’s top-ranking officials, including President Saakashvili, Defense Minister Kezerashvili, Interior Minister Merabishvili and others, followed the aim of complete elimination of Ossetians living in the territory of South Ossetia,” Markin said, adding that earlier those people had the international immunity from criminal charges.

"As the president and government in Georgia have changed, the person involved in the crimes in the territory of South Ossetia have lost their positions, and the Investigative Committee is considering presenting to them the charges and putting them on the international wanted list,” the source said.

"Following the orders they gave, on August 7, 2008 the Georgian military opened fire at civilians and Russian peacekeepers. Tanks and artillery were involved there,” he said. "At those times, representatives of (Ukraine’s nationalistic organisation) UNA-UNSO participated on Georgia’s side.”

The events in August 2008 in South Ossetia claimed 162 lives of civilians, 255 were injured. Russia’s ten peacekeepers were killed, and 42 were wounded.