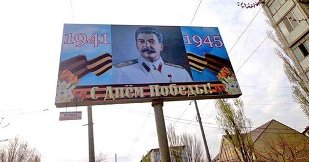 The decision to dismantle the banners with the image of Stalin in Makhachkala was caused by the discontent expressed in the blogosphere, said a source from the city administration. At the same time, according to his story, there were no official appeals to the authorities on the matter.

The "Caucasian Knot" has reported that on April 27 billboards with the image of Joseph Stalin appeared in the capital of Dagestan, installed on the eve of the 70th anniversary of the Victory in the Great Patriotic War. A message about the disappearance of them arrived to the SMS-service of the "Caucasian Knot" on April 29.

The billboards depicting Stalin were placed the city under the order of the government of the republic, said a source from the Makhachkala Mayoralty.

The Internet has critics of both placing Stalin billboards in the streets of Dagestani cities, and of removal of them.

"It's disrespectful to the repressed nations," writes Aligadji Magomedov on the community wall of the "RED I Real Dagestan I" in the social network "VKontakte".

"If not for Stalin, we'd never have won the war; the Lord provides people with the ruler they deserve," Amir Amirov gives his opinion.

Earlier, the authorities of the city of Dagestanskie Ogni refused to install a monument to Stalin by the 70th anniversary of the Victory to put, including due to people's ambiguous attitude to this person. According to the Society "Memorial", the so-called "Stalin's execution lists" contained names of 54 residents of Dagestan.