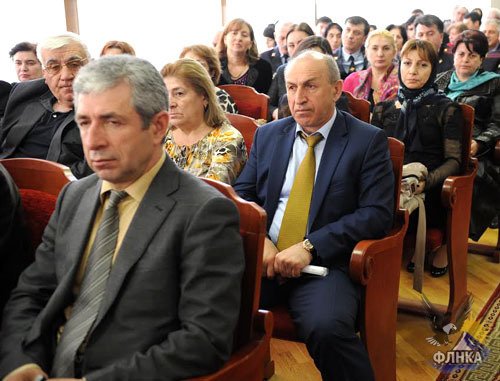 On Monday, Magomed Suleimanov was officially presented as the new acting head (Mayor) of the Makhachkala administration to city activists, the Mayoralty staff and City Council Deputies. Suleimanov addressed his subordinates and promised not to make "cadre revolutions."

Let us remind you that on April 4 the head of Dagestan Ramazan Abdulatipov appointed Magomed Suleimanov, the former head of the Republic's Mandatory Health Insurance Fund, to be the new acting Mayor of Makhachkala. His predecessor Murtazali Rabadanov stepped down voluntarily. A source from the Mayoralty believes that one of the reasons for Rabadanov's resignation could be the events in Makhachkala dated to the 60th birthday of the former Mayor removed from his duties by the court.

While introducing the new acting Mayor, Ramazan Abdulatipov noted Suleimanov's extensive experience as the Mayor of the city of Izberbash and described him as an experienced manager who would be able to maintain stability in Makhachkala.

Suleimanov said, in his turn, that he would pay special attention to the city infrastructure and creation of new jobs.

Earlier, the "Caucasian Knot" wrote that local experts did not believe that the above reshuffle could solve the problems of the city.