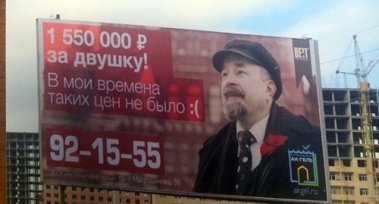 Dagestan Department of the Russian Anti-Monopoly Service (AMS) was addressed by the Communist Party of the Russian Federation (CPRF) with a complaint against some building company, which used images of Vladimir Lenin and Joseph Stalin in its ads. Communists point to inadmissibility of using images of historical figures for profit-making, Natalia Shkandyba, the head of the press service of the Dagestani AMS told the "Caucasian Knot" correspondent on March 3.

In this regard, it was decided to conduct a people's poll and afterwards the AMS will decide whether to sue the above company under the advertisement law, she said.

The website of the AMS has posted photos of the outdoor ads of the construction company in question, in which one of the billboards has the following words placed next to the image of Vladimir Lenin: "In my days, there were no such prices", and next to the image of Joseph Stalin: "Apartments for people!"

The question "Do you consider it ethical to use images of political leaders of the Soviet Union, in particular, Vladimir Lenin and Joseph Stalin, in advertising?" appeared on the AMS website on March 2.