What Is Behind New Scandal with Oligarchs? 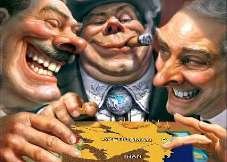 Against the spread rumors and the media reports of arrests of representatives of big business, the police continue to keep a deathly silence. This silence is especially strange, given that we are talking about fraud in hundreds of millions of AZN of public funds.

These funds, according to various media reports, were issued by the International Bank for big businessmen in different periods and were not paid back. No one spoke of this, but two months ago the head of International Bank Jahangir Hajiyev was fired - he was in fact a tycoon and serious theft was revealed then.

Among the arrested businessmen the names of the director of Azerinshaat Mehdi Aliyev, the former chief executive of Sheki Murad Jabbarli and Abdul Antsukhski (son of the MP and businessman Ali Antsukhski, who was killed in the early 90s) are called.

IBA is the largest bank of Azerbaijan and it accounts for 60% of all loans in the country. According to one version, during the reign of Hajiyev, businessmen close to him received soft loans at low pledges.

Reduction of the country's income from the fall in oil prices and the recent devaluation of the manat revealed serious problems of the financial system.

One of the recipients of loans is claimed to be the brother of the head of the State Committee for Work with Diaspora Nazim Ibrahimov, Ibrahim Nehramli. Under his adventurous project Caspian Islands - the construction of a city in the sea – there was 850 million USD, although Nehramli claims he received only 57 million USD from the IBA and his debt with interest amounts to 70 million USD.

Meanwhile, according to official data, the amount of NPLs in the country is 1.2 billion manat. Such credits at IBA amount to 1.1 billion manat.

According to unofficial information, unofficial arrest also affected the assets of Hajiyev.

Another resonant arrest, again unconfirmed officially, was the arrest of another prominent oligarch, Piriyev Nizami, founder of PNN Group.

Piriyev did business abroad, but a few years ago appeared in Azerbaijan and began to build a large plant for the production of methanol, to the opening of which even the former British Prime Minister Tony Blair was invited five years ago.

In addition, PNN became a partner of the famous brands De Beers and Hamley's, as well as developed a network of franchised fast food KFC.

Finally, it is reported about the detention of the cofounders of the company Azimport, Rashad Mammadov and his son-in-law Asgar Mammadov. This company is known for the implementation of major projects on landscaping in Baku and the Absheron peninsula at the expense of the state budget.

Recently, Rashad Mamedov was dismissed from the post of Chief of the State Flag Square Complex.

According to some observers, the reason for Mammadov’s dismissal was his violation of the "rules of the game" and the appropriation of large funds.

The economist Natig Jafarli believes that the recent arrests indicate the absence of guarantees for businesses for even those who worked "under the roof" of the authorities.

In Azerbaijan, all officials are small or big businessmen, and they should know that they can at any time be confiscated all, including their freedom.

These events are the final nail in the coffin of the business environment: local and foreign businessmen preferred to look for a "roof" and establish business before, but now this scheme does not work. This is only the beginning and the war only inflames, Jafarli wrote on his Facebook page.

According to some reports, the investigation of cases against the businessmen is carried out by the Main Directorate for Combating Organized Crime at MIA.

At the same time, some experts believe that "soft power” will be applied against the businessmen and they will be able to pay off, returning what had been "stolen." This explains the lack of official information about the arrests and detentions.

However, apparently, a new scandal begins, regarding oligarchs and the number of its victims is going to grow.