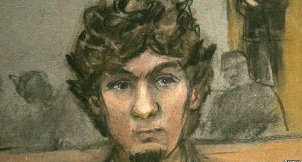 The trial against Dzhokhar Tsarnaev, who has been sentenced by the jury to death penalty in the case of the terror act committed during the Boston Marathon, has attracted not much attention in Dagestan. This was stated by local journalist Ramazan Radjabov. Meanwhile, residents of Chechnya actively discuss the case and do not believe Dzhokhar Tsarnaev is guilty, states Kheda Saratova, a member of the Human Rights Council under auspices of the leader of Chechnya.

In Dagestan, the Dzhokhar Tsarnaev's case aroused no public reaction. This opinion was expressed by Ramazan Radjabov, a correspondent of the Dagestani newspaper "Novoe Delo".

"In general, I see no reaction. I monitor publications in the local print and electronic media, and I never saw the materials highlighting the trial against Dzhokhar Tsarnaev. I've listened to the report prepared by Fatima Tlisova and broadcasted by the 'Echo Moskvy'; however, no discussion has followed the report," Ramazan Radjabov has told the "Caucasian Knot" correspondent.