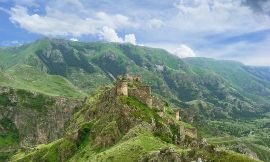 Death sentence passed in the USA to Dzhokhar Tsarnaev that caused resonance in Chechnya; wedding of police boss with a minor girl; two-day sit-in of ex-workers of Yerevan "Nairit" Factory; conviction of Rostov activist; oppositionists' hunger strike in Azerbaijan demanding to release political prisoners; start of consideration of Ali Taziev's case in Rostov-on-Don, – see the review of these and other events in the Caucasus during the week of May 11-17, 2015, prepared by the "Caucasian Knot".

Dzhokhar Tsarnaev sentenced to death in the United States

On May 15, the ethnic Chechen Dzhokhar Tsarnaev, accused of committing the terror act in Boston, was sentenced by a jury to the capital punishment – death penalty. At trial, his defence admitted his involvement in the terror act, and asked for a life sentence, while the state prosecution demanded the death penalty. Tsarnaev himself refused to speak at the trial. The death sentence to Dzhokhar Tsarnaev is contrary to the European Convention on Human Rights (ECHR), but it can be explained by the peculiarities of the US judicial system and Americans' mentality, Russian lawyers believe. In Dagestan, where Dzhokhar's parents live, his trial has not attracted much attention, local journalists report. In Chechnya, according to Kheda Saratova, a member of the Human Rights Council at the republic's head, people are actively discussing the case and do not believe in Tsarnaev's guilt.

The wedding of Nazhud Guchigov, the head of the Nozhai-Yurt ROVD (District Interior Division) of Chechnya, to the 17-year-old Kheda (Louise) Goylabieva, was held on May 16 inGrozny. The marriage ceremony began at the Grozny Civil Registry Office. The upcomingwedding was reported on April 30 by the Moscow journalist Elena Milashina. According to her story, Guchigov threatened Kheda's relatives demanding to force the underage girl from the village of Baitarki to marry him on the day of her 17th birthday. This information caused public resonance in Chechnya. Guchigov himself, the leadership in the region and the Russia's Children Ombudsman Pavel Astakhov refuted the information. On May 14, Olga Bobrova, a Milashina's colleague, said that Elena had left Chechnya after learning that Chechen power agents were looking for her. On the following day, the "Novaya Gazeta", where Milashina works, refuted the Olga's statement about threats to Milashina's life in Chechnya, claiming that she had left Chechnya because she was urgently needed in Moscow.

The story of the wedding of Nazhud Guchigov and Kheda Goylabieva, in the context of their age difference, is typical of the Caucasian society, said the experts, interviewed by the "Caucasian Knot" correspondent. Residents of Chechnya report that motivation for unequal marriages in the region may be different; and cases of pressure on girls' families are not uncommon.

On May 14, former employees of the non-working Yerevan "Nairit" Factory announced a sit-in strike held in front of the Armenian government building demanding payment of their wage debts. This was preceded by the information voiced out on May 13 by Ervand Zakharyan, the Minister of Energy and Natural Resources of Armenia, that the World Bank (WB), which conducted an audit in order to decide on attracting investments for restarting the factory operation, concluded that investing was not reasonable. However, as the Minister said, the final fate of the factory will be decided by government. In their turn, the factory union leaders assert that the WB is not interested in restarting the "Nairit", and conducted the audit in favour of competitors from the USA and Germany. The sit-in strike stopped on May 15. Activists decided to dissolve and give the government time until May 19 to make a decision. Meanwhile, the Armenian authorities have postponed the payment of tuition fees of the children of "Nairit" ex-workers.

The Novocherkassk City Court has sentenced a local activist Sergey Loshkaryov to two years in a colony-settlement on charges of illegal arms circulation. This was announced on May 12; while the verdict was announced on May 8. Loshkaryov has already served 11 months out of 24 months awarded to him at the Novocherkassk SIZO (pre-trial prison). The Human Rights Centre (HRC) "Memorial" has recognized Loshkaryov to be a political prisoner, thinking that the reason for opening a criminal case against the activist was in his video clips posted on the Internet in March and April 2014, in which Loshkaryov criticized Russia's policy in relation to Ukraine. In Novocherkassk, Loshkaryov also gained fame through the publications on the YouTube of videos about the situation in the "Krasnaya Vesna" (Red Spring) Grove, where trees were cut down for the construction, which was opposed by local residents.

On May 12, the "Musavat" Party announced a hunger strike demanding to release all the Azerbaijani political prisoners, according to local rights defenders, 80 persons in total. According to the leaders of the oppositional party, the action is endless in nature and covers not only Baku, but also the regions of the country. The hunger strike is held in the party offices in Baku and regions. On the first day, six persons joined the hunger strike – five in the office of "Musavat" Party in Baku, and one activist – in the Masalli District in Southern Azerbaijan. On May 14, two more activists joined the protest in the central office of the "Musavat" Party. According to Elman Fattah, the deputy chairman of the party, the number of those wishing to participate in the hunger strike is growing, while those, who are already hunger-striking, have stated that they do not intend to stop the protest, despite the deterioration of their health.

On May 12, the North-Caucasian Military District Court began considering a new case against Ali Taziev, also known as Magas, who had already been sentenced to life imprisonment on charges of commanding militant groupings accused of the attack on Nazran in June 2004. The court has rejected all the Taziev's motions, including his request to appoint an interpreter and provide time for getting acquainted with the case files. Taziev himself, who is charged with several articles of the Russia's Criminal Code, including an attempt on life of law enforcers, and of a terror act, refused to admit his guilt. On May 14, the trial passed into the stage of examining the prosecution's evidence; and the court defined the list of witnesses and victims to be questioned. The volume of the case makes around 80 volumes.