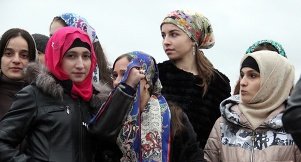 The Heinrich Böll Foundation has announced the results of the comprehensive study on the status of women in Chechnya, Ingushetia, Kabardino-Balkaria, and Dagestan. Respondents mentioned high rate of unemployment, low wages, and poor quality of health services as their main problems.

In 2014, the study was carried out in the republics of Northern Caucasus by local women's organizations with the support of the Heinrich Böll Foundation.

High rate of unemployment was mentioned as the main problem by 66% of female respondents in Ingushetia, 52% in Chechnya, 46% in Kabardino-Balkaria, and 44% in Dagestan.

Chechnya is safer than UK - Kadyrov