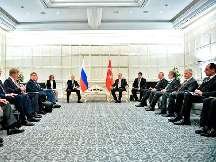 The Presidents of Russia and Turkey Vladimir Putin and Recep Tayyip Erdogan held talks in Baku, but their conversation took place behind closed doors.

According to TASS, the leaders "were obviously not inclined to start a conversation in the presence of the press" and a few minutes were looking for something to talk about during the protocol shooting. Judging by the composition of the Russian delegation, they spoke about cooperation in the energy sector, most likely about the Turkish Stream pipeline.

According to RIA Novosti, on the part of the Russian Federation the meeting was attended by the presidential aide Yuri Ushakov, Foreign Minister Sergei Lavrov, Energy Minister Alexander Novak, the head of the Russian Agency for Atomic Energy, Sergei Kiriyenko, and the head of Gazprom Alexey Miller.

TASS reports that after several minutes of silence, while photographers were taking pictures, the leaders exchanged impressions about the opening ceremony of the first European Games, which they both attended yesterday. Erdogan, in particular, noted that the ceremony was not attended by anyone of the leaders of the EU countries. "Turkey, as a candidate for accession to the EU, was representing the entire European Union," Putin said with a smile on this. Putin and Erdogan agreed that the ceremony was very colorful and mutually wished success to the teams of their countries and to the athletes of the "hostess" of the Games, Azerbaijan.

However, after Putin's statements on the Armenian Genocide in Yerevan on April 24 this year, Ankara lost interest in this pipeline and accused Russia itself of genocide of other peoples.