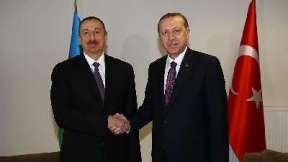 The President of Turkey Recep Tayyip Erdogan will arrive in Ganja on February 18 to participate in a high-level meeting of the Turkey-Azerbaijan Strategic Cooperation Council. The event will be chaired by Erdogan and Aliyev, the press service of the Turkish President administration stated.

According to the agency Anadolu, the meeting will focus on developing and strengthening various aspects of the bilateral relations.

The sides will separately discuss the Karabakh conflict and the development of regional and international issues. It is expected that during the meeting there will be signed a number of documents, the same source said, without specifying which ones.

This will be the fifth in a row meeting of the High-level Strategic Cooperation Council, whose creation initiative was launched in May 2010. The last meeting was held in Ankara in January 15, 2015. It discussed issues of cooperation in various fields, including the development of the energy and transport corridor and the Karabakh settlement.

Analysts of Turan News Agency noted that Aliyev receives Erdogan in his field in difficult conditions, when the relations between Turkey and Russia are at open confrontation. However, the agency notes that Russian officials and media almost did not express annoyance about the upcoming summit in Ganja. This may indicate that Moscow expects some positive statements on the Turkish-Russian relations from this meeting.

President Ilham Aliyev, receiving the Minister of Foreign Affairs of Turkey Mevlut Cavusoglu on November 27, 2015, talked about the willingness to mediate in resolving the conflict between Russia and Turkey.

Just a week ago a mediation initiative was shown by the Kazakhstan President Nursultan Nazarbayev, who, after receiving the Turkish Prime Minister Ahmet Davutoglu in Astana on February 6, spoke to President Putin on this subject already on February 8. According to Russian media, the tone of circles close to the Kremlin was first categorically negative against Nazarbayev's initiative, but later it was commuted. So Aliyev has a chance to be heard.