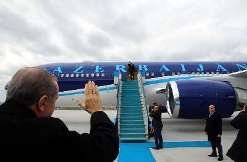 On 15 March, the Azerbaijani President Ilham Aliyev made a short, not planned visit to Turkey, which was dictated by circumstances. This visit was presented and accepted as a gesture of Azerbaijan’s solidarity with Turkey, and in particular with President Recep Tayyip Erdogan after the terrorist attack in Ankara on March 14th.

This attack prevented a second attempt by Erdogan and Aliyev this month to hold the fifth high level meeting of the Turkey-Azerbaijan Strategic Cooperation Council. The fifth meeting of the council was to be held on February 18 in Ganja, but was postponed after the terrorist attack on the previous day in Ankara. A second attempt  to hold the  summit was  planned for March 15 in Baku,  but was again prevented  by another terrorist attack in Ankara, and again the  day before. Both explosions were carried out by suicide-bombers near the state institutions - the army and police. The attacks cannot be called a coincidence. This is confirmed by the following factors: time (the day before the summit), the place (Ankara, the place of the army and police deployment), events (Strategic Cooperation Council), the perpetrators -(PKK.)

The sudden transfer of the meeting to the capital of Turkey, the heart of the country, where the major terrorist strikes were aimed showed that the two sides are no longer willing to retreat under the onslaught of terror, and are not going to postpone the meeting. Aliyev's visit to Turkey as the head of his team can be regarded as a demonstrative response to the terrorist acts.

But there are other motives of  sudden  transfer of the  summit to Ankara. It may be the necessity to discuss one-to one some important issues, that can no longer  be postponed, but not for  the protocol, which was signed on the results of meeting. May be the third side which made these attacks was trying to prevent the discussion of these very important issues. Ankara has consistently argued that the attacks have been carried out by Kurdish terrorists linked to Syria and the Kurdistan Workers' Party (PKK). This fact itself leads to the conclusion that the agenda of the talks between the presidents could include: 1. The crisis in Syria, 2. Kurdish terrorist threat. 3. Economic crisis 4. The reforms proposed by the United States.

crisis has provoked a military campaign of the Turkish army against the PKK’s growing threat, especially after the chaos in Syria, which first  was hidden, and then became an open base to support the Kurdish terrorists, conducting an armed separatist struggle against Ankara. Erdogan was confronted with the necessity of a preventive military strikes against Kurdish rebels in order to weaken them by the time when peace will be established in Syria. At the same time the PKK has strong political and economic roots in Azerbaijan, which has an impact on the foreign policy behavior of Aliyev. In this sense, the PKK could be interested in disrupting the negotiations of Aliyev with the US and the American Institute of reforming the political and economic system in Azerbaijan,  on which Washington insists  consistently.

Over the past 15 years just Erdogan has been an important mediator between Azerbaijan and the US administrations on the issue of reforming Azerbaijan. Erdogan organized a handshake of the  Presidents Obama and Aliyev in Antalya in November last year, which in diplomatic language means the consent of Baku to begin discussion on the agenda of the US-Azerbaijani relations, proposed by Washington. After the November meeting, though slowly,  Aliyev has taken some steps to reform, and the United States initiate, and then  set aside the application of sanctions against the Aliyev administration for breach of obligations. This indicates that the parties are under active discussion, but did not achieve results. In this sense, a crucial intermediate stage of such negotiations is the upcoming nuclear summit in New York in late March, where Aliyev has been invited not to discuss the nuclear programs.

This summit is waiting from Aliyev a clearer picture of the presentation of follow steps to democratize the country, de-monopolization of the economy, increase of transparency, and more. After November's handshake the President Aliyev began to make a slow and cautious steps towards  (one cannot say that he is interested in them himself for personal reasons) with an eye to political and financial groups surrounding him, including representatives of the PKK, which are not interested in the reforming  criminal state system in Azerbaijan. Consultations with Erdogan could relate to this particular issue.

Jagland: terrorist attack in Turkey is attack on us all

Turkey convenes the ambassadors of the UN Security Council