Baku forgets about the rights of indigenous peoples of Azerbaijan 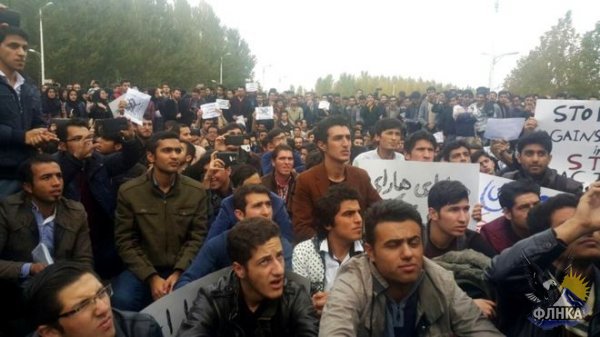 Mass protests of local Turks were held in the North-West of Iran these days. The reason of it was an episode of the popular children’s television show on one of the public television channels in Iran. In particular, the program showed a Turk child brushing his teeth with a toilet brush.

This aroused indignation of the local Turkish community, which eventually resulted in large protest demonstrations in the cities of Tabriz, Urmia, Maraga, Zanjan, Ardabil and a number of other settlements in places of compact settlement of Turkic-speaking population of Iran.

The protesters, according to the Azerbaijani news agency "Haqqin.az”, chanted anti-government slogans such as: "We are Turks," "Death to racism", "Long live Azerbaijan" and others.

The Republic of Azerbaijan has accused the Iranian side in the systematic violation of the rights of national minorities in the country, and particularly the rights and freedoms of Turkic minority in Iran.

What rights violation of the Turks in Iran are they talking about? Despite the fact that the official language of Iran is Persian, in the northern areas of the country the Turks have a state television in the Azerbaijani language, newspapers and magazines are published in the Azerbaijani language, at the same time they are absolutely not limited in the use of the native language. And the situation of Azerbaijanis in Dagestan and Georgia is the same.

However, in Azerbaijan the relation to ethnic minorities is radically opposite. For example, the Lezgins, the country’s largest ethnic minority, do not have TV and radio in the Lezgi language.

In 2008 the branch of the Dagestan State University in Baku and later the branch of the Baku Pedagogical College in Kusar were closed. And now there is no one University or College in Azerbaijan to train the Lezgi Language philologists. Thus each year the level of teaching of the Lezgi Language is rapidly deteriorating, the Lezgin language is an optional subject and the status of the language, its prestige is systematically underestimated. All the above results in decreasing of the number of the Lezgi language speakers.

The last 20-30 years Azerbaijanis from other regions are moved to Lezgi lands, where the Legzins have been living for centuries. Azerbaianis massively buy lands in Lezgi villages of the Kusar region. The state allocates to Azerbaijanis special subsidies and incentives for this. There are all reasons to predict that in very soon some multi-ethnic environment will be enforced in the region and the language of interethnic communication will be the Turkic language.

Any demonstrations and attempts of Lezgins to reclaim their rights are harshly suppressed, and the activists are sentenced to long terms of imprisonment. The number of such prisoners is big.

We support that the Azerbaijanis living in Iran, Dagestan and Georgia are granted all the rights and freedoms stipulated for any national minority to be able to preserve and develop their own language and culture.

However, official Baku should not forget that its duty is to assist in maintaining and increasing linguistic and cultural diversity of Azerbaijan, as well as to create normal conditions for indigenous minorities in their country.

A clear indication that the situation of Azerbaijanis in Iran is not so bad, as it is described in the media, is the fact of spontaneous demonstrations in several major cities in the region with a strong national agenda protest. The public is aware of the existing problems due to the national media that cover the problems of the Turks of Iran.

But it is impossible to imagine that representatives of the indigenous peoples in Azerbaijan also could go to protests with the national agenda which testifies to the fact that their rights are not respected, though the authorities of Azerbaijan usually emphasize that the rights of minorities are fully observed in their country.

Indigenous peoples of Azerbaijan do not have their national media to inform the people about the situation with their rights and interests. People are in the dark about their situation as there is no media to support their interests, and the state propaganda broadcasts the triumph of tolerance and democracy.