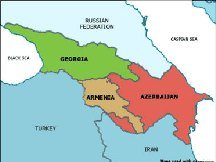 Thus, answering the question of the site "Moderator.az" whether the requirements for creating a "Unified Azerbaijan” do not leave a bad association, when there is Karabakh problem there, the politician replied in a sharply negative way: "No, of course not. Should we forget about Tabriz, Derbent, Geokchai, Borchali or Kirkuk, and pretend as if they are not an integral part of Azerbaijan only because they have long been occupied?"

According to Bunyamin Gambarli, currently on the agenda is "the question of unification of Azerbaijan", as far as the Gulistan and Turkmenchai peace treaties "have already lost their validity."

"When the Unified Azerbaijan will be created, then the Azerbaijani Statehood will be restored... This state will have a territory of 700 km2, and Derbent in the north, the Gulf in the south (he calls it Kenger bay), Kirkuk in the west will be within its borders," stated the Azerbaijani politician.

In its turn, Ph.D. Rafael Kasumov, commenting on Karabakh issue, argues that "on the geopolitical level Azerbaijan has the advantage."
According to him, Russia is losing its position in the region. "Instead, the prestige of fraternal Turkey in the South Caucasus grows. In this case Azerbaijan will be able to return not only Karabakh but also Erivan khanate," stated Kasumov.

Tabriz is one of the largest cities in Iran, Derbent is an ancient city in Russia (Dagestan), Borchali is a territory in the Georgian province of Kvemo-Kartli, 45% of its population is Azerbaijanis, Kirkuk is an oil-rich region in Iraq, a part of it is populates by Turkomans.