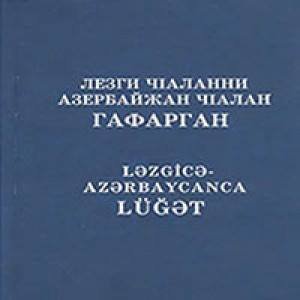 In April in Baku publishing house "Azerbaijan" published a large Lezgi-Azerbaijani Dictionary consisting of 800 pages and including about 70 thousand units.

While creating the Dictionary a lot of work was accomplished with the existing Russian-Lezgi, Russian-Azerbaijani, Lezgi-Russian and Azerbaijani-Russian Dictionaries. However this Dictionary has several distinctive features.

Firstly, it minimized the amount of words borrowed from the other languages. This is dictated by the fact that in the Lezgi language there are enough words that can replace them.

Thus, the Dictionary excludes dozens of words that do not fit into the norms of the language, but is used in the current Lezgi written language. The second difference is in the content of archaic token of the Lezgi language.

Hundreds of native people's words were taken from the Lezgi books published within the past centuries. These are the words that reveal the richness of our language. At the same time, the Dictionary includes the neologisms that appeared in the language during the last century.

The Dictionary also includes over 4 thousand native Lezgi words, almost forgotten or out-of-use. This is the result of the expedition of the newspaper staff who worked in the field collecting data for the newspaper regular column "Gafalag" (Dictionary).

These words were systematically published in the newspaper in the 1998-2014 years. The Dictionary is mainly designed for translators. However, there are elements of a glossary.

This, in particular the words related to politics, science, philosophy, history, literature, etc. The Lezgi-Azerbaijani Dictionary was created by the celebrated masters of the pen, Sedaket Kerimova and Muzafer Melikmamedov, the staff of the newspaper "Samur". The reviewers of the Dictionary are Ahmedullah Gulmagomedov, Dagestani scholar, PhD in Philology, Academician of the Russian Academy of Natural Sciences, Faida Ganieva, Ph.D in Philology, and Ejder Agayev, Azerbaijani scholar, professor, academician of the Russian Academy of Pedagogical and Social Sciences.