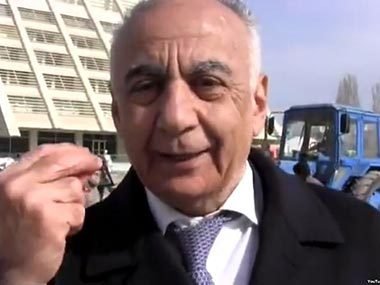 Information is spread in Azerbaijan that allegedly the son of the mayor of Baku Hajibala Abutalibov - Israfil Abutalibov, who is suspected of having ties with the Wahhabis, has been arrested or has fled the country.

According to the Azerbaijani news portal "Axar.az" a reliable source told that last week during the joint operation of the Ministry of National Security and the Ministry of Internal Affairs of Azerbaijan held in "Lezgi mosque", located in the historic city of Baku, Israfil Abutalibov was arrested.

The portal notes that for a long time, the Azerbaijani media write that Israfil Abutalibov helps Wahhabis to immigrate to Syria and to fight against the governmental troops. It is noted that during the operation in the "Lezgi mosque" the law enforcement officers had questioned the believers about Israfilov Abutalibov.

According to the article, on June 20 the MNB officers and the Interior Ministry of Azerbaijan arrested 20 Wahhabis in "Lezgi mosque." This information was confirmed by the ministries.

Israfil Abutalibov was arrested on charges of supporting Azerbaijani Wahhabis, who want to join the terrorist group "Islamic State of Iraq and the Levant", as well as of funding them and of establishing ties with terrorist groups. It is also noted that during search held in prayer-place of the Salafis in Baghdad a huge amount of money was found, this served the main reason for his arrest.

However, as the portal notes, Secretary Hajibala Abutalibov denied information that the mayor's son was arrested or had fled the country.