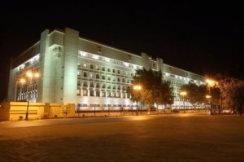 A number of pro-government media circulated information about arrest of some officials of the National Security Ministry and a special operation carried out in the offices of the Azerbaijani special services. Azeri Daily re-checked this information with its own sources close to the law enforcement bodies.

As it became known to Azeri Daily, yesterday, officers of the State Guard Service and the Prosecutor General's Office of Azerbaijan held a joint special operation in the Ministry of National Security. As a result of operational actions there were detained officials of the Monitoring Centre of the Ministry (management for wiretapping phones), in particular, Natavan Mammadova and Major-General Teymur Quliyev, and deputy head of the Antiterrorist Centre Ilqar Aliyev.

At this time, detainees are held in the jail of the Ministry itself. Monitoring centre has been sealed, investigation is ongoing.

With regard to the former head of the National Security Ministry, according to some informed sources, Eldar Mahmudov is presently at home, allegedly under virtual house arrest.

Law enforcement officials do not comment on the special operation in the Ministry of National Security conducted by the State Guard Service and the General Prosecutor's Office.