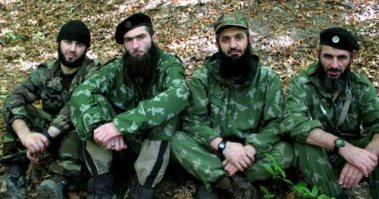 Until now, the information about the establishment of a branch of the "Islamic State" (IS) in Northern Caucasus has caused no reaction of local militant leaders Mukhammad Suleimanov, Zalim Shebzukhov and Aslambek Vadalov. The "Caucasian Knot" has reported that on June 21 an audio record was posted on the YouTube announcing that militants of four vilayets of "Imarat Kavkaz", which is recognized as a terrorist organization, had sworn allegiance to the leader of the IS (earlier named ISIL) Abu Bakr al-Baghdadi. The IS, whose activities are also prohibited in Russia, took the militants' oath and appointed Abu-Mukhammad (Rustam Asilderov) to lead the regional branch. Before the appearance of the information about the oath, the "Imarat Kavkaz" and the vilayet of Dagestan were under the command of Mukhammad Suleimanov; the militants of the vilayet of Nokhchijcho (Ichkeria) were led by Aslambek Vadalov; and the vilayet of Kabarda, Balkaria and Karachay was headed by Zalim Shebzukhov. All the three – Suleimanov, Vadalov and Shebzukhov – gave no comment on the previous oaths to the IS (ISIL) of individual militant commander, while the first of them dates eight months back. Let us also note here that for a long time the information about the oaths was disseminated as video records, where those swearing were depicted. This time, the story about the oath given by militants of "Imarat Kavkaz" is available only in the audio format, which caused doubts about its authenticity.