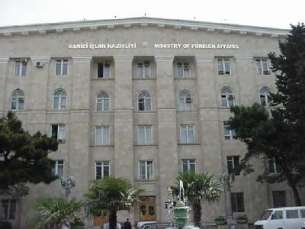 On July 1 the British Ambassador to Baku Irfan Siddig was invited to the Azerbaijani Foreign Ministry, where Deputy Foreign Minister Khalaf Khalafov expressed his strong protest to the government of the country in connection with the invitation of the leader of Karabakh separatists Bako Saakyan to the Royal Institute of International Affairs Chatham House in London.

According to the Foreign Ministry of Azerbaijan, the ambassador was told that such actions do not correspond to the spirit of friendship and strategic partnership between the two countries, and are regarded as a step directed against the sovereignty and territorial integrity of Azerbaijan.

In turn, Ambassador Siddig assured that the UK does not recognize the Nagorno-Karabakh regime and has no connection with it.

Siddig said he will inform his government of Azerbaijan’s concern.

In its reply the British Foreign Office stated that London supports the territorial integrity, sovereignty and independence of Azerbaijan and does not recognize the regime established in Nagorno-Karabakh and the British Government's position remains unchanged.

It is also emphasized that the visit of the leader of the separatist regime is not organized by the British Government and in London he will not meet with any official.

Communist and member of the Masonic Lodge apologizes for visiting Karabakh