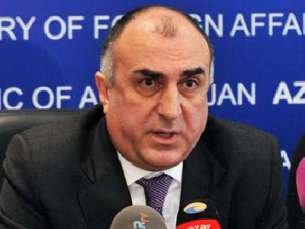 Azerbaijan has taken the necessary steps for holding democratic, fair and transparent parliamentary elections and created the necessary conditions for monitoring the elections by observers. This was stated by the Foreign Minister of Azerbaijan Elmar Mammadyarov, when receiving the PACE mission, which arrived to assess the situation in Azerbaijan.

Mammadyarov called "inadequate to the mandate of the OSCE ODIHR" the refusal of this entity to send an observation mission to Azerbaijan. According to him, OSCE sent from 400 to 500 observers to countries with a population exceeding 100 million. At the same time, ODIHR offered to send 400 observers to Azerbaijan with a population of 9.5 million people. According to Mammadyarov, it is "absolutely disproportionate” to have so many short-term and long-term observers in 125 constituencies.

The primary task of the OSCE is providing technical support to the elections, the head of the Foreign Ministry said. He expressed a hope that the issue will be discussed with the participation of the OSCE chairman and a solution will be found.

It should be noted that the refusal of Baku to receive the above-mentioned number of observers is illogical. The government constantly assures everybody of the democracy and transparency of the elections. In such a case, they should have wanted as many OSCE ODIHR observers as possible to confirm that.

Elmar Mammadyarov’s claim against the Director of the OSCE ODIHR