Moscow will not build a radar station in Azerbaijan 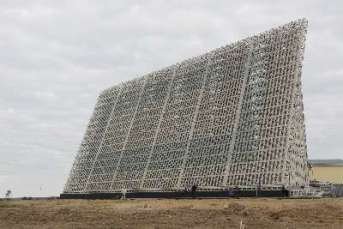 Russia will not build new station "Voronezh" on the site of the radar "Daryal" in Gabala, and does not consider it reasonable to build such systems abroad, said  on Saturday the Chief of  the Army Staff of the Military Space Forces-General General Anatoly Nestechuk. "I think that the funds of the national system should be in the territory of the Russian Federation and guaranteed to perform these tasks,"  said Nestechuk radio RSN, responding to a question about plans to build a radar station "Voronezh" in Gabala on the site closed the station "Daryal".

There is  a station "Dnepr" in Kazakhstan,  radar "Volga" in Belarus beyond Russia, he recalled. "But even in these strategic areas we have enough funds to carry out tasks to  prevent  a missile attack,"  added Nestechuk.

This  summer a person close to the Defense Ministry of TV channel "Zvezda" reported on the beginning of construction in 2017 in Azerbaijan a new radar "Voronezh", instead of a closed "Daria." Official Baku did not comment on this statement, and the statement  of Nesterchuk was the first official opinion on this matter on the part of Moscow.