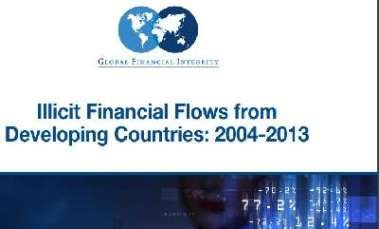 The leading place occupies China and Russia, respectively, $ 140 billion and $ 105 billion annually. However, the volume of stolen capital per capita in Azerbaijan is ahead of the leaders - $ 1010. In Russia, the per capita capital accounts $729, and $107 in China.

From the post-Soviet countries ahead Azerbaijan is Kazakhstan - $ 16.704 billion; Ukraine  - $ 11.676 billion, then comes the so-called standard of "perfection" of Belarus - $ 8.820 billion. "Hateful" Armenia lags behind tenfold - $ 983 million. In the oil and gas Turkmenistan illegal export  is only $ 36 million . Somehow not neighborly, notices  Baku.

Global Financial Integrity - an American research organization that analyzes illicit financial flows from developing countries and supports the adoption of national and international measures that are designed to reduce them. Method of calculation takes into account only the GFI illegally derived funds from operations not reflected in the documents. The most important channel for GFI  noticed lowering or increasing actual value of exports and imports in the customs declaration - it accounts for 83.4% of illegal capital flight, according RBK.

Ingush budget will total about 30 billion rubles in 2014