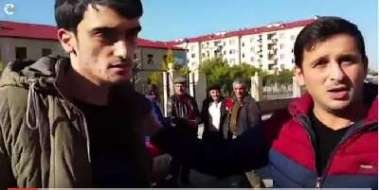 On 12 January spontaneous protests on January 12 in connection with the difficult economic situation began in the Agjabedi region,  in 300 kilometers to the  south-west of Baku. Three of the protesters climbed onto the roof of an apartment building, threatening to commit suicide because of the bank debt and the lack of income. Thus, this is the third region of the country, where during the day, people go out to the streets, expressing dissatisfaction with the social and economic problems. Protesters in Agjabadi complain about the dismissal,  absence of salaries, the dominance of government officials, and corruption. Similar reasons caused the dissatisfaction of the population in  the cities of Lankaran and Siyazan. The authorities are trying to calm the people with promises and police pressure.

The protests are  the result of a sharp devaluation of the manat, which has led to job cuts and massive layoffs  of citizens. At the same time, the authorities have failed to provide social protection measures.