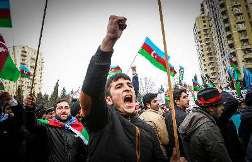 The main theme of the meeting of the National Council on Sunday was the corruption of power and the difficult economic situation for ordinary citizens. The rally was attended by 10 thousand people.
"The criminal policy of the authorities, the desire for self-promotion and thoughtless steps led to the fact that with the state budget of 19 billion manat, they decided to hold the Olympic Games with a budget of 8 billion manat. Who and for what needs this?Such huge amounts of money could be directed to address the serious social and economic problems, raising the minimum wage and pension, which is only 150 manat," said in his speech the PFPA leader Ali Kerimli.Confirmation of incompetence of the authorities also became the sharp devaluation of the national currency, despite public promises from Ilham Aliyev that the rate of manat will not change.Such a policy suggests that the interests and concerns of ordinary citizens are not interesting to the authorities. Moreover, the authorities are trying to impose on their shoulders all the social and economic costs of their failed policies, said Kerimli.He further criticized the government for its willingness to pay all the expenses of the participants of the upcoming European Games, including the Armenian delegation."Such cynicism takes place against the background of the refusal of the authorities to solve the basic problems of refugees and disabled veterans. This is a national disgrace!" said Kerimli.He also accused the government of squandering the nation's wealth in their spending on self-promotion and meaningless activities. Making all this, the ruling family does not think it necessary to explain with what sources this is all done. Instead they pursue and arrest all those who raise such questions - journalists, activists and public figures."To put an end to all this lawlessness, to get rid of the 20-year yoke of the ruling family, we must be united and active, start a series of protests, not to let them intimidate us and ensure that the authorities consider their people," said Kerimli.This proposal was met with a standing ovation by the protesters, and his speech was repeatedly interrupted by the slogan: "Stop the plunder! Thieves in the power, go! Resign!"Member of the National Council and Deputy Chairman of PFPA Gezal Bayramly in her speech said that the current situation is the logical result of the mindless and thieving government policy. "They are convinced that there is no force capable of preventing them lie endlessly, suppress and trample on their citizens. We just have to show that the people do not agree with all this, that the people do not like it, and contrary to the official propaganda, the people do not support the official policy," she said.For 20 years, refugees and war veterans cannot receive compensation, but the authorities are ready to invite and pay the costs of representatives of the country which occupied our lands, whose representatives killed, maimed and drove from our land most of these refugees and our troops. "Shame on you! How can you stand all this and how can you look into the eyes of your people?" a member of the National Council, a war veteran Rovshan Ahmedov said in his speech.PFPA Deputy Chairman Fuad Gahramanli accused the authorities of creating a regime of thieves and managing the country with criminal methods. "Corruption, bribery and monopoly have been raised to the rank of state policy. All government departments resolve issues through bribes and corruption, and how in such a situation could they think about the people? Only we can make this power remember the people and we will achieve it,"he said.The head of the National Council Jamil Hasanli criticized the lack of government's economic strategy. Their politics is of spontaneous and thoughtless character. "It is time to give an answer to the people: Why have you turned the country into a center of crime and theft, corruption and hypocrisy?You rigged elections, perverted morals and culture of the people. You erected on a pedestal lies, creating the image of corrupt and primitive country. At the head of it all stands Ilham Aliyev himself and that is why, as it all have become the norm, he must answer for it," said Hasanli, prompting applause of participants who began chanting "Resign!"Today, millions of people who have taken loans from banks are taken hostage. Banks give loans at 25-30%. And then there was sharp devaluation of the manat to 34%. People took out loans in manat and now they are told to pay in US dollars and that automatically increases the credit by 34%. How can the economy and business develop in this situation? 80% of these banks belong to the Aliyev family.Another form of corruption is extortion by tax authorities, which in excess of the official tax collect cash of 10-15 thousand from businessmen, explaining this with the lack of money for the European Games.The government, the state and the law in Azerbaijan are associated with the same name - Ilham Aliyev and for everything that is happening in the country he is responsible, said Hasanli, urging young people not to take an observing position and to actively participate in politics.Following the results of the meeting, they adopted a resolution that stated that the government deceived citizens, sharply devaluating the manat, although they had earlier given assurances that this would not happen. Therefore, the authorities should compensate for these losses to the population: to raise salaries and pensions, reduce the interest on the loan repayment and put an end to corruption and monopolies. They should also support the most disadvantaged sections of the population and entrepreneurs.

Meeting of National Council: to Continue Fight against Predatory Policies of Authorities!