Meeting of National Council: to Continue Fight against Predatory Policies of Authorities! 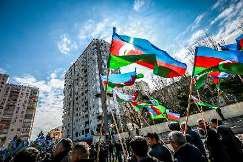 The authorities continue to ignore the legitimate interests of their citizens, the economy is still in the hands of monopolies and corruption is the main principle of the government.

"Our legitimate demands and complaints are ignored, and the government continues its policy of plunder. Do we need such a government and do we want to live in such conditions?

No, we do not want that and we need to get this power to hear us and start real reforms. For this, we must come together and organize ourselves and we should not be afraid and should be ready to fight," the leader of the Popular Front Party Ali Kerimli said, opening the rally.

Recently it was reported that 2,000 cardiac patients appealed to the Ministry of Health with a request for treatment, but only two of them were assisted. At the same time, the authorities spend millions on marble, monuments and such senseless events as the Flower Festival.

We have to make this government abandon shows and squandering of natural resources and funds received from the sale of oil. "We do not need these European Games, which will cost us 8 billion and will bring nothing. Such costs during the economic crisis are a demonstration of complete incompetence and inability to properly lead the country. Do we need such a government?" he said.

Kerimli asked the participants of the action if they want to continue rallies. "Yes, we are not afraid and we demand our rights!" the protesters chanted several times.

Kerimli’s speech was several times interrupted by the slogan "Resign!", "No robbery!", "Fight to the end!", and others.

A member of the National Council Eldaniz Guliyev in his speech condemned the government policy of moral terror against the intelligentsia, members of the public, culture and media.

"The authorities intimidate, terrorize and put pressure on them in order to silence them and make them not protest. We must fight not only against political repression, but also against such moral terror," he said.

A member of the National Council Gultakin Hajibeyli exposed the "unparalleled" Azerbaijani economy, which is based on the sale of oil. "The government has lied to its citizens for years, arguing that the country is almost the first in the world in terms of its development. But the drop in oil prices has shown that all this is nonsense.

The authorities were forced to admit that the oil price will be around 50 dollars. For us this means huge material losses and impoverishment.

The authorities have already cut pensions, salaries and scholarships, explaining this with the need to pay the costs of the European Games. We do not need these Games. Instead, the authorities have to start deep political and economic reforms in order not to bring the case to a social explosion, and we must demand that the government do it all. We also urge the authorities to release all political prisoners," she said.

A member of the National Council, human rights activist Oktay Gyulaliyev focused on the fate of political prisoners Leyla Yunus, Intigam Aliyev, Rasul Jafarov, Ilgar Mamedov and many others.

"Throwing minded citizens behind bars, the authorities have a goal to create a society of people without memory or thoughts, who would not be able to claim their rights and freedoms. The task of the government is to kill them morally and convince everyone that the fight against this power is impossible and the government of Ilham Aliyev cannot be brought to responsibility," he said.

The youth activist Emil Salimov accused the authorities of failed policies in education, health and youth. Teachers and doctors have been brought to the level of beggars. They are paid 150-200 manat and forced to extort money from citizens. Thousands of students are unable to pay tuition and cover their minimum needs.

The leader of the National Council Jamil Hasanli noted that the aims and objectives of the protesters are struggle for justice and against lies and robbery. "Spending money from the sale of oil here and there, this government thought that it deals with the economy. But the tragedy of manat has shown that they have neither the economy nor the mind, nor any realistic plans. We must show them that they are temporary, while the owners of this country are we, the people, rather than those who seized the country and suck it as parasites," he said.

Hasanli said that a group of former police officers approached him, expressing dissatisfaction with the attitude of the authorities to pensioners. If the authorities do not change their attitude towards them, they will join the protest.

Of particular concern is the fate of those who have taken loans from banks and now cannot pay. Today, it is difficult to find a family that would not have fallen into this bondage. The power that created such a situation should realize that it will face a social explosion, said Hasanli.

The rally was attended by about 10,000 people, the organizers said. Although the meeting took place without incident, on its completion there were reports about the arrest of some participants.

A rally of the opposition forces started at the stadium Mahsul in the Yasamal district of the capital at 15:00. It involves members of the National Council of Democratic Forces.

The rally is held under the slogan "Stop Plunder!" and directed against the socio-economic policy of the authorities, which led to the devaluation of the manat, dramatic impoverishment of large segments of the population,  failure in the economic and social spheres, and corruption.

The rally involves several thousand people and the protesters continue to arrive.