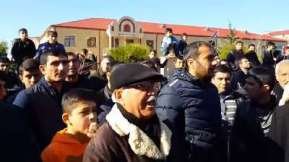 They blame the opposition. Or "religious radicals.” Or even poachers. But whatever they do, even as oil prices dip to record lows, officials in energy-rich Azerbaijan are not blaming a recent string of regional protests on the economy.

Azerbaijani police on January 14 reported making 55 arrests connected to protests over the last two days in towns to the north, south and east of the capital, Baku.

Protesters in Siyazan, a town 115 kilometers north of Baku, clashed with riot police equipped with tear gas and rubber bullets. The Kavkazsky Uzel news service reported that some 300-400 residents rallied in front of Siyazan’s town hall on January 12 and 13 against continued inflation and a massive recent depreciation of the manat, the national currency. The Azerbaijani service of RFE/RL carried footage of what appeared to be military trucks entering Siyazan.

In the opposite corner of the country, protesters on January 12 blocked a highway in the town of Liman, about 215 kilometers south of Baku. Regional officials met the demonstrators to hear their concerns over growing consumer prices and a ban on cash-sales of tobacco and alcohol (since "temporarily” lifted).

Official suspicion for the disruptions has fallen on alleged activists from the opposition Popular Front of Azerbaijan and Musavat Parties — one young Popular Front activist, Turan Ibrahim, has been arrested for seven days — as well as "various radical and religious extremist forces.”

Details have not emerged about the so-called "extremist forces” suspected in stirring up the demonstrations, but police have announced that they caught two groups of 19 people supposedly bent on setting up a sharia government by force.

A few days earlier, citing an alleged coup plot backed by an anonymous foreign power, riot police had cracked down on protests in the heavily religious, economically squeezed town of Nardaran, northeast of Baku.

Some officials, though, have other suspects in mind for the displays of street anger. The environment ministry blamed protests in the Neftchala region, 175 kilometers to the south of Baku, on "poachers" of fish. One ministry official speculated darkly that "forces behind the poachers” organized a demonstration which blocked a main road for two hours, Contact.az reported

While the demonstrations in Siyazan, Lankaran, Fizuli, Ajabedi and Agsu appear to have abated, officials so far seem to be addressing piecemeal the larger question of how to resolve the economic problems that sparked participants’ anger.

As oil prices tanked to under $30 per barrel, the Central Bank on January 14 closed banks’ retail foreign-exchange bureaux. To support the manat, the State Oil Fund will fork over $200 million to the country's banks via auction.

In a throwback to Soviet practices, local political bosses in one region met on Thursday with businesspeople to emphasize President Ilham Aliyev’s ban on "artificially high” food prices. Elsewhere, the director of a bread-factory’s store has been arrested.

This is not the first time that protests have led to claims of conspiracies. In 2013, officials blamed unrest in the provincial town of Ismayilli over economic complaints and local-government abuses on unnamed "foreign powers.”  Names were never supplied, but long-term jail sentences for two opposition-leaders charged with allegedly stirring up locals were.

Various international critics continue to condemn such tactics, but the Azerbaijani government is not particularly concerned.  It has a lot riding on maintaining stability.

Until oil prices began to slide, Azerbaijan had been on а fast economic-growth track and lavish spending spree. The economic success, however unequally distributed, was seen as a key factor in the longtime hold on power by President Ilham Aliyev and his entourage.

They don't intend to let that hold weaken now.