How the removal of sanctions from Iran will impact South Azerbaijan 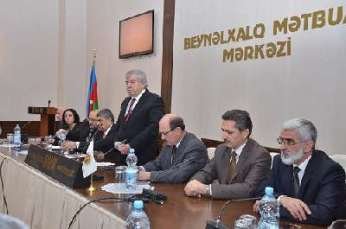 The theme of today's debate, organized by the Congress of Azerbaijanis of the world was  the future of the Azerbaijani population, after the lifting of sanctions  from Iran.

"Removal of sanctions and Iran's entry into the world economy as a full member will enable Tehran  not to be afraid to suppress the national movement in South Azerbaijan," said in his speech, the co-chairman of Congress Sabir Rustamkhanli. A member of the National Academy of Sciences, a historian Nazim Jafarsoy agrees with this assessment and believes the risk is quite real.

"Tehran has agreed with the West only the question of nuclear disarmament. However, he did not take the obligation to limit its geopolitical appetites and to commit themselves to respect human rights and democratic standards," he said. The leader of "independent intellectuals" Sulhaddin Akbar said that Azerbaijan is located in the center of geopolitical clashes between North and South, between East and West. There is a struggle between democratic and undemocratic forces, the main task is the question of choosing the right position.

"Iran and Azerbaijan must first pass an exam on democracy, and only then  we can think about solving problems," he said.

Other participants in the debate raised the question of finding ways to protect and preserve national sovereignty movement of Southern Azerbaijan, as well as the recognition factor of South Azerbaijan from the world's top players.

Speakers also stressed that Azerbaijan should be in the West team, which could have a decisive influence on the fate of the South Azerbaijan. "The West wants to create a unipolar world, while Russia, China and Iran - a multipolar. We should be together with the West," said Rustamhanly.