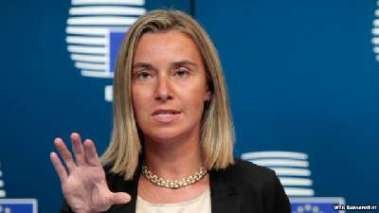 The settlement of the Karabakh conflict is among the priorities of the European Union, said on February 29 EU High Representative for Foreign Affairs and Security Policy Federica Mogherini at a joint press conference in Baku with Azerbaijani Foreign Minister Elmar Mammadyarov.

"The European Union supports the territorial integrity and sovereignty of Azerbaijan," she said.

Mogherini stressed that "the European Union does not recognize Nagorno-Karabakh."

However, she pointed to the "instability" of the status quo of the conflict.

According to Mogherini, the Nagorno-Karabakh issue remains a priority for the EU.

She noted that the EU supports the efforts of the Minsk Group on the peaceful settlement of the conflict. EU is ready to contribute to the steps that bring together the parties and calls upon them to refrain from statements and actions detrimental to the peace process.

Mammadyarov, for his part said that Mogherini informed about the position of the international community and international organizations on the conflict, including the four resolutions of the UN Security Council. "We want a speedy settlement of the conflict for we do not believe that this is a "frozen conflict". From this point of view, we call upon the European Union to make efforts together with the OSCE Minsk Group in order to achieve progress in the conflict settlement, because for 25 years the problem has not found its solution," said Mammadyarov.

Tusk calls on Baku and Yerevan to abandon the aggressive rhetoric