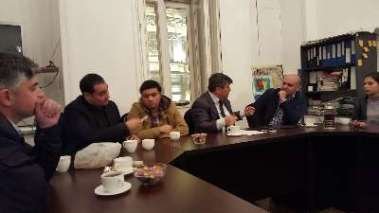 The Civil Society Protection Committee (CSPC) will hold a hearing in the near future on the situation in the village of Nardaran, where an unofficial state of emergency has been introduced.

The committee noted on March 12 that the exact number of those arrested in Nardaran and their fate is still unknown. Many of them are without lawyers.

CSPC also intends to organize a press conference in support of Elchin Hasanov, Deputy Chairman of the NGO Legal Education of Sumgait Youth and a Majlis member of the opposition Popular Front Party. Next week the trial will take place on Hasanov, who is charged with Article 221.3 (hooliganism committed with application of a weapon or subjects used as a weapon).

In addition, CSPC will hold special hearings on continued government pressure on NGOs and the tightening of legislation in this area.

A special place at the meeting was paid to the topic of political prisoners. An action of solidarity with them will be held next week. It was also decided to appeal to the President of the country on the application of the general amnesty for all political prisoners on the eve of the Novruz holiday.