In Dagestan, house-museum of poet Suleiman Stalsky burned down 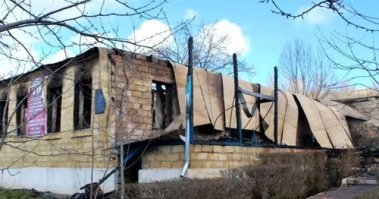 In the village of Ashaga-Stal, the house of the Lezgin poet is burned down as a result of arson, local residents believe.

According to an official from the Regional Ministry for Emergencies (MfE), the house-museum burned down at night of March 22.

"The fire was completely extinguished in 20 minutes. No one was injured," the "Interfax" quotes the MfE's official as reporting.

According to the villagers, the arson "could be committed by radicals who treat the celebration of the Yaran-Suvar (Novruz Bayram) holiday as a blasphemy."

"On the holiday of Yaran-Suvar, villagers lit bonfires as a tradition, and the radicals decided to set fire to the house-museum of the poet, thus defying the society. You want a fire get it," the Lezgin portal "Lezgi Yar" quotes one of the local residents as saying.

Museum director Lydia Stalskaya, a poet's granddaughter, also believes that the house burned down as a result of a fire, reports the community of the Federal Lezgin National and Cultural Autonomy (FLNCA) in the social network "VKontakte".

Zarema Butaeva, Dagestani Minister of Culture, has announced the plans to restore the museum, reports the website of the Ministry of Culture for Dagestan.