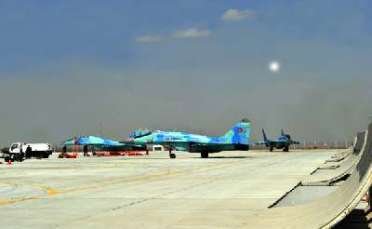 The joint military exercises of the Air Force of Azerbaijan and Turkey (Falcons TURAZ - 2016) ended in Konya, Turkey.

As reported by the Azerbaijani Defense Ministry press service, the final stage of the exercises, which started on March 7, was observed by the commanders of the Air Force of Azerbaijan and Turkey - Lieutenant-General Ramiz Tahirov and Gen. Abidin Unal.

From the Azerbaijani side the exercises involved three MiG-29 and three Su-25  with personnel.

As part of the exercises the Turkish pilots performed familiarization flights in the MiG-29 fighters and Su-25 bombers, and the Azerbaijani pilots did the same in the F-16 fighters.

In addition, there was a joint operation to destroy strategic targets of the imaginary enemy, as well as aircraft defending them.

Along with this, an operation to destroy conditional terrorist bases was conducted.