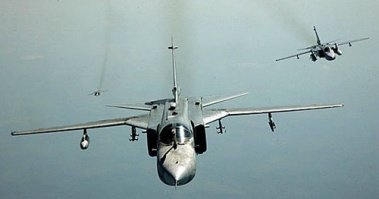 The exercises of the Southern Military District (SMD) have political context and are intended to master various scenarios of the air warfare and defence for the Black Sea Fleet, said the experts, interviewed by the "Caucasian Knot".

On February 8-12, Southern Russia was the venue of an off-schedule check of the combat readiness of troops. According to the press service of the SMD, the exercises involved about 8500 servicemen of various types and kinds of troops. On February 16, the military bases of the Caspian Flotilla in Astrakhan and Makhachkala held joint exercises of ships, air defence forces and aviation of the SMD. In parallel, on February 16, the Krasnodar Territory launched a flight-tactical exercise with the Air Force and Air Defence Force of the SMD.

The present exercises have a "serious political background" in terms of relations with Turkey and military actions against the "Islamic State" (IS) in Syria, said Alexander Perendjiev, a military expert of the Association of Independent Military Analysts.

"It is obvious that they work out the possible tactics of defending the Black Sea Fleet, the Crimea, the southern regions of Russia, and especially, Northern Caucasus. The exercises are intended to master a quick mobilization of all types of armed forces," said Perendjiev.

The military exercises in Southern Russia, like those in other country regions, are "playing the muscles," said Konstantin Sivkov, Doctor of Military Sciences and Vice-President of the Academy of Geopolitical Problems.

The Russian-Turkish relations, aggravated by the downed Russian aircraft, have forced Russia "to work out a scenario of the air war," he said.