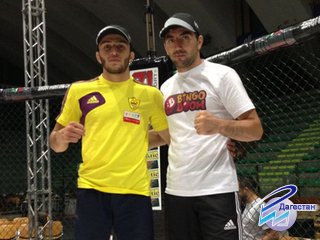 The qualifying competition for the World Cup has come to a conclusion today in Livorno, Italy. As to A. Aigunov, the Russian national team took the first place leaving behind the Italian team, as well as athletes from France.

The winners of the championship are Ibragim Alderov (up to 84 kg) and Salikh Karavaliev (up to 71kg), the latter who completed all battles ahead of schedule was awarded with the title of best championship fighter.

By results of the competition, Daniyal Davidov (up to 45 kg), Gadzhimurad Magomedov (up to 65kg), Gasan Gadzhiev (up to 45), Hadzhidaud Gasanov (up to 78 kg) won gold medals.

It should be noted that all athletes are the graduates of Makhachkala professional mixed martial arts Club.