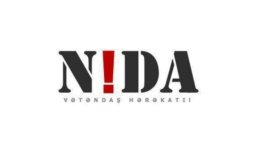 BAKU -- Three youth activists in Azerbaijan have been sentenced to 15 days in jail for distributing antigovernment stickers and leaflets.

A court in Baku found the leader of the Free Youth movement, Ulvi Hasanli; one of its activists, Macid Marcanli; and a member of the Nida citizens' movement, Kenan Qasimli, guilty on July 15 of "violating social order" and "disobeying police."

The three were arrested on July 14 in connection with stickers and leaflets distributed recently in the Baku subway calling on people "to change the government."

In March, seven Nida activists were arrested for possession of illegal drugs and weapons after they took part in a public protest in Baku.

Human Rights Watch has accused the Azerbaijani authorities of trying to silence Nida activists, saying the government has a record of pressing false charges to silence dissent.