Dagestan: rally in support of prosecutor Magomed Orudjev was 100 strong 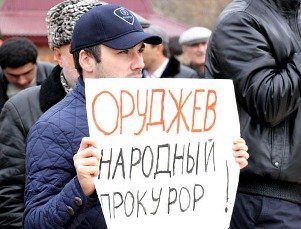 Today, in Makhachkala, relatives and friends of Magomed Orudjev, a prosecutor of the Sovietsky District of Makhachkala, detained on suspicion of illegal arms circulation, held a rally against the tyranny of law enforcement bodies. The action brought together about a hundred people, the "Caucasian Knot" correspondent reports.
Let us remind you that a criminal case against Magomed Orudjev was opened on November 13. The prosecutor refused to plead guilty, claiming that the prosecution is a provocation because of his principled position on a number of cases.
The fired prosecutor is pursued for no grounds, said his advocate Tayibat Salmanova.
"The illegal acts against Orudjev are taken in response to his refusal to take a lower post in the process of rotation. He submitted his refusal, but said that he agreed to take the same position in any other region of the republic. After this, so to say, disobedience, his persecution began. Unreasonable orders about his malfunctions followed, and then – an illegal, in my opinion, criminal case followed," said Salmanova.