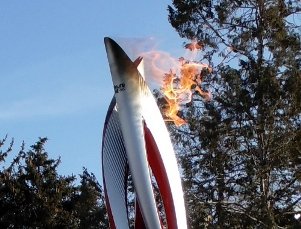 The "Caucasian Knot" has reported that the route of the Olympic Torch Relay was significantly reduced for safety reasons. It was planned that the Olympic torch will be carried by 270 persons in the central streets of Makhachkala. Finally, 67 torchbearers were running at the "Anji Arena" in Kaspiisk.

Zagalav Abdulbek, Olympic wrestling champion, was the first person who carried the Olympic symbol in Dagestan. At the end of the relay, the Olympic torch was carried by Olympic champion Khadjimurad Magomedov. He lit the Olympic Flame bowl together with the Dagestani leader Ramazan Abdulatipov, the RIA "Novosti" reports.

The organizational component of the event was provided by about 100 specially trained volunteers, the "Interfax" quotes the press service of the Makhachkala city administration as reporting. The Olympic Torch Relay ceremony was accompanied by bikers and riders in traditional Dagestani national costumes, the edition "Vse o Sochi" reports.

Let us remind you that the Olympic Flame has arrived in Dagestan from Astrakhan. From Dagestan, the Olympic torch left for Chechnya.