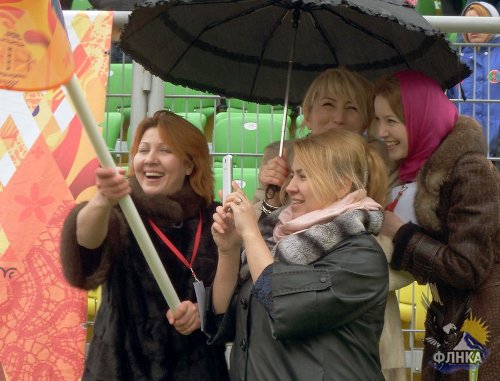 In Dagestan, the welcoming ceremony of the Olympic Flame was held at the "Anji Arena" Stadium, in the presence of about 20,000 spectators, the spokesman of the relay organizing committee told the "Caucasian Knot" correspondent.

The public order at the stadium and around was maintained by policemen, employees of a private security company (known as ChOP), the security service of the relay organizing committee and about 600 volunteers.

The capacity of the "Anji Arena" is about 30,000 seats. One of the four stands – behind the podium with the Olympic Bowl – was kept empty. The other three stands were completely full, the "Caucasian Knot" correspondent reports.

The first torchbearer to appear in the stadium was Zagalav Abdulbekov, the first ever Olympic Champion in Dagestan and Northern Caucasus (in freestyle wrestling at 1972 Olympic Games in Munich), two-time world champion and five-time champion of the USSR.

At the final stage of the event, the Olympic Flame was lit in the Olympic Bowl by the Olympic Champion Khadjimurad Magomedov and the head of Dagestan Ramazan Abdulatipov.

Let us remind you that part of the audience was made up by students sent to the stadium by their educational institutions "in the voluntary-compulsory" manner, said the author of the message that arrived to the SMS-service of the "Caucasian Knot".