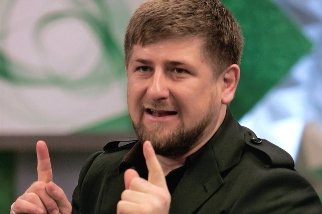 GROZNY, March 02, /ITAR-TASS/. Chechen President Ramzan Kadyrov gave comments on the Saturday statement by leader of Ukrainian far-right movement Right Sector Dmitry Yarosh regarding Chechen warlord Doku Umarov. The Chechen president noted that he would not leave unnoticed Yarosh’s statement that he "was fighting in Chechnya,” Kadyrov wrote on his official Instagram page.

"We saw graphically whom America and Europe consider as an oppositionist and a political force. Yarosh appeals to terror publicly, but countries that allegedly come out against terror help him. The United States recognised Umarov as one of main modern terrorists and Yarosh is a good guy for them,” the Chechen leader stated.

Kadyrov also noted that he had talked to leaders of the Crimean Tatars and they "are not going to take up arms against Russia,” no matter how Ukrainian nationalists try to set them against Russia. "We will not leave unnoticed Dmitry Yarosh’s statement that he was fighting in Chechnya. With our aid Doku Umarov went there from where no one came back yet. We will give a ticket to Yarosh there either,” Ramzan Kadyrov stated.

The Chechen president told a news conference in Itar-Tass in December 2013 that he had reliable information about killing of warlord of Caucasian extremists Doku Umarov in a special operation.

Right Sector leader Dmitry Yarosh turned for help to Doku Umarov on Saturday and urged Caucasian gunmen to intensify their fighting against Russia.