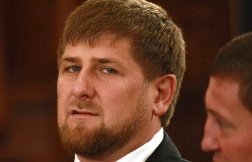 "The world witnessed the tragedy in Libya, Syria, Iraq and Afghanistan, and in Ukraine. Under the guise of democracy women, old men and children are killed. Cities and religious sacred places are destroyed. The U.S. and the EU are directly responsible for such events. Their policy is aimed against countries and peoples,” Kadyrov said on Saturday.
"I’ve decided to add U.S. President Barack Obama, European Commission President Jose Manuel Barroso, EU Council chairman Herman Van Rompuy, EU High Representative for Foreign Affairs and Security Policy Catherine Ashton and European Parliament chairman Martin Schulz in my blacklist. I’ve instructed to freeze their banking accounts and any assets. These politicians are banned entry to the Chechen Republic from July 27,” he said.
The EU sanctions released so far are targeting Russian high-ranking officials, as well as state-owned banks and entities belonging to people believed to be part of Russian President Vladimir Putin’s inner circle. The move brings the total number of sanctions-hit individuals to 87 and the number of affected entities to 20.

The director of the FSB security service, Alexander Bortnikov, and the head of the Russian Foreign Intelligence Service, Mikhail Fradkov, are on the new list of 15 people and 18 entities targeted by an asset freeze and visa bans, the EU’s Official Journal said.

Also on the list is Chechen President Ramzan Kadyrov, it added.