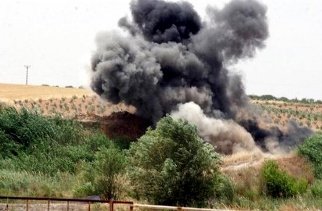 Three servicemen of the National Army of Azerbaijan were killed and six others wounded by a landmine explosion on April 7 in the Fizuli direction of the contact line frontline, the press service of the Azerbaijani Ministry of Defence (MoD) told the "Caucasian Knot" correspondent.

The chief surgeon and chief resuscitator of the Armed Forces arrived in the hospital located in the village of Akhmebdeili, Fizuli District, to provide high quality medical care to the wounded soldiers. Zakir Gasanov, the Minister of Defence of Azerbaikan, also came to the place to investigate the incident.

Let us note here that the MoDs of Azerbaijan, Armenia and Nagorno-Karabakh are regularly accusing each other of violating the ceasefire.

Explosion in the boiler room of the sports complex Locomotive (UPDATED)