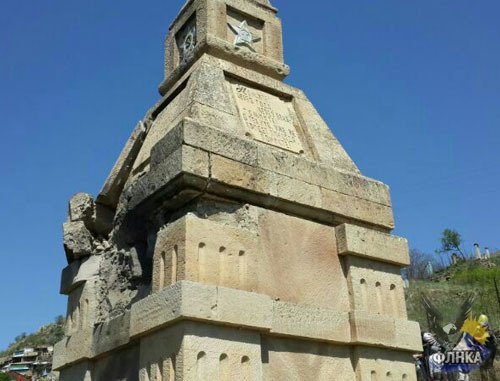 On May 8, unidentified persons blasted the monument to the soldiers of the Great Patriotic War (WW II) in the village of Sogratl in Dagestan.

The information about the fact was received by the SMS-service of the "Caucasian Knot".

According to the latest data, the explosion occurred at night on May 9. "At night on Friday, the monument to WW II participants and a memorial plaque installed in the village cemetery and bearing the names of the Sogratl villages who never returned home from the war were blown up," one of the villagers told the "Caucasian Knot" correspondent. According to his story, "the monument and the cemetery are located in front of the village, where there are no residential houses, that is why nobody was hurt and no property was damaged."

"It's unclear who could do it. People are outraged. This year, because of the tragic death of employees of the Ministry for Emergencies (MfE), who fell into the abyss in their car, the villagers wanted to cancel the celebratory parade, but after the explosion they decided to hold it. This was a matter of principle," Khadjimurad Sagitov, the editor-in-chief of the Dagestani newspaper "Novoe Delo", told the "Caucasian Knot" correspondent.