Videographer votes in Azerbaijani Parliament instead of MPs 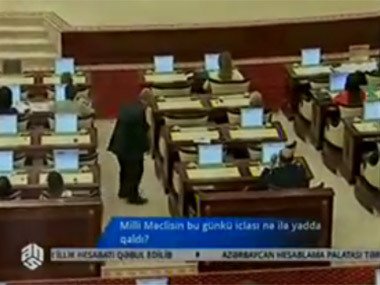 Yesterday, at the sitting in the Azerbaijani Parliament, videographer named Akif voted instead of the MPs, Azerbaijani news portal "Haqqin.az" writes.

"Seeing that the vote on one of the bills has already begun, and the deputies have not yet returned from lunch, the adventurous operator kept his head and began to vote instead the absent MPs," the article reads.

According to the portal, the relevant structures of the Parliament haven’t yet said anything about the legitimacy of the operator’s actions.

Moreover, parliament sitting became more memorable and ridiculous due to reservation of the ruling party MP Siyavush Novruzov who called the "Molotov cocktail" a "Molotov cutlet."

During the autumn session of the Parliament of Azerbaijan the journalists recorded on their Smartphones how the MPs vote instead of each other or one deputy for several immediately. These records have been shown by all the media and have called the criticism of the deputies. After that, Akif Tevekkyuloglu, press secretary of the Azerbaijani parliament, stated about the ban on bringing Smartphones to the Legislative Assembly.

Azerbaijan is not leaving Parliamentary Assembly of Euronest